First California record of C. caretta for the H.E.R.P. database.
Several accepted records have come from this area over the years.
Dead individual found floating several miles offshore near the top of 9-mile bank, nearly straight west of Point La Jolla.
Found during a pelagic birding trip. We approached it with the boat to examine it further and were able to obtain good views.
Originally thought to be a dead, bloated sea lion, but as we approached it we discovered that it was actually a turtle.
This turtle appears to have been dead for quite some time and bloating has distorted many characteristics.
Determined to be a Loggerhead based on the distinctive rusty brown color of the carapace and very large size, with the carapace being roughly three feet in length.
The below description is based off of what you can seen in the voucher photos.
The most obvious feature determining this as a turtle is the large reddish-brown rust colored carapace. Carapace is heart-shaped being widest just behind the "shoulders" and tapering down from there rearwards.
Carapace domed just behind the shoulders and sloping downwards for the posterior two-thirds.
Most of the carapace was obscured by gull/seabird droppings, that have apparently been using this turtle as a floating raft/perch.
Two of the presumed three longitudinal dorsal ridges can be seen, most clearly on the posterior third. One along the center of the costal scutes and a mid-dorsal ridge along the center of the vertebral scutes.
At least Five seams between the costal scutes can be see with care.
Several costal scutes are visible as well as a few marginal scutes and at least three vertebral scutes can be seen.
The skin is cream colored with some yellow on what appear to be the bridge scutes. The visible fore-flipper appears to be turned forward, obscuring the head and showing the underside of the flipper. One of the three large, darker brown, carpal/pisiformal scales can be seen on the upper edge of the fore-flipper as well as two more smaller scales further towards the terminus of the flipper.
Wrinkled skin and possibly small scales can be seen at the top of the hind-flipper that is just barely protruding above the surface of the water.
The "armpit" cavity is clearly visible between the joint of the fore-flipper and the bridge scutes. Wrinkled skin can been seen as well as a slight shadow from the overhanging carapace. 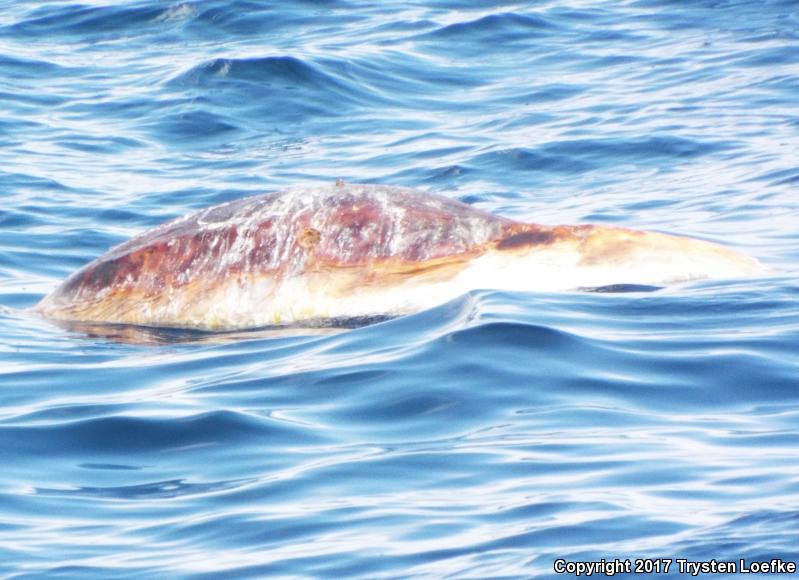 Yes, It definitely could have been the same individual. It was surprising to find a large adult, because as you said, we usually only get juveniles.

Local San Diego pelagic expert Dave Povey reports having seen three Loggerheads so far this summer. They have been mid-sized juveniles out by the Thirty Mile Bank.

Loggerheads can occasionally be found in good numbers off the coast of northern Baja, Mexico, and San Diego. I believe they are usually juveniles drifting in offshore currents.

A large adult washed up dead in San Diego County recently. I think it was found in Encinitas. Possibly the same one you saw offshore??